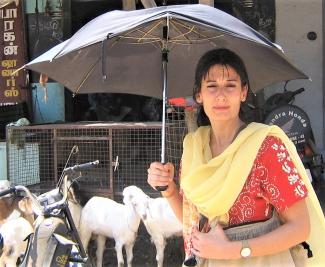 I was born in Luxembourg in 1961. There I spent all my childhood and part of my adolescence, living and breathing the European culture.

After having studied and worked in the field of applied arts, I trained in yoga at various European schools, particularly in Paris, at the Académie du Yoga de l'Energie and later at the Étude et Transmission du Yoga, with Claude Maréchal.

At the same time, in the twenty years from 1986 to 2006, I studied and practiced yoga in the course of a number of extended stays in Chennai (India), at the Krishnamacharya Yoga Mandiram and in particular as a direct student of T.K.V. Desikchar, one of the most authoritative Indian sources of the modern world. In those years, I studied with my teacher  in a one-to-one relationship, according to the most authentic Indian tradition. With him, I studied the philosophy, psychology and pedagogy of yoga, its technical foundations and their practical application.

From the late '70s to the early 2000s I joined a number of Buddhist meditation retreats, in Italy and abroad: I studied and practiced the foundations of Buddhism in the Japanese Zen Soto tradition, in the Burmese Vipassana meditation tradition and in particular the teachings of the master Thich Nhat Hanh, rooted in the Vietnamese Zen Rinzai tradition.

In the early years of 2000, driven by the interest to deepen the knowledge of human nature and fascinated by the role that authentic human contact can play in favouring positive transformation and individual evolution, I trained in counselling at the Istituto Internazionale di Psicosintesi Educativa of Milan.

In those same years, I trained in supporting dying people at the Santa Maria Delle Grazie Hospice in Monza and at the Maison Jean Garnier in Paris.

The achievement of a master in emergency counselling and psychotraumatology (at  "Vertici", Network di Psicologia e Scienze Affini, Florence) brought me back to India, where, in 2006, I dealt with the grieving process and post-traumatic stress management with abused women and street children.

From the early 2000s till today, I trained in Gestalt, Rogers' Person-Centered Approach, Transactional Analysis (at ASPIC in Milan), NLP (at NLP Italy), conflict management (both at the Centro Psicopedagogico per l'educazione e la gestione dei conflitti and at the Center For Nonviolent Communication). I also deepened positive psychology, in particular the subject of forgiveness (training at the International School of Forgiveness)

I have been teaching yoga in various public and private bodies for thirty years, in Italy and abroad. I have held individual and group courses for people of all ages and in particular for people with health problems. I have taught in refresher courses for school teachers, training courses for yoga teachers, cooperating, among other things, with the Istituto Universitario di Scienze Motorie in Rome.

For over a decade, I have carried out counselling activities with a humanistic-existential approach.

I currently spend most of my time in Spain. With pleasure and dedication, I keep on devoting part of my time helping people in their individual journey towards self-knowledge, in their mindfulness practice, personal growth and health care.